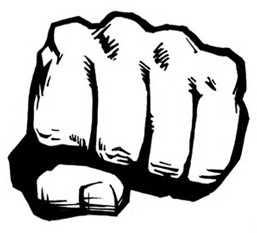 I love a kid with spirit, a kid with guts, one who isn’t afraid to step up and be counted, not afraid to stand up for what’s right. The reason I love spunky kids is, I have a child just like this. My son is gutsy, knows what’s right and wrong, but very often pushes me a little too far with his strength of character. He is loud, brave, a little punchy, energetic beyond belief, and will always, without fail, step in if he thinks someone is being wronged. He can often be seen pushing his big sister out of the way, so as he can confront the big kid who’s being mean to her. He always runs to the aid of his friends. He has been delivered, straight from my side of the family, in every way possible. This is all good and well but sometimes, his protective nature gets the better of him and he takes it too far. Honestly, he has been known to make much bigger kids cry and run to their mums when he has been standing up for someone. He is small but fiery, strong but gentle, tough but loving, the guy you just have to be friends with, because he will always have your back, no matter what. He is loyal, very loyal, almost too loyal, and this unfortunately has landed him in trouble in many a play park.

Every parent has been in that nightmare situation at least once, where you turn up to school or day care and you’re told that today your child has hit someone, or bitten someone or pushed someone over. Your heart sinks. You’re shocked that your little darling would ever do such a thing; even though you know as well as everyone else, they’re all capable of a little nibble, slap or shove. I remember picking up Monty when he was only 2 and being told he had pinched someone.  I couldn’t make out whether my heart was breaking because I was upset that my child would hurt someone else on purpose, or whether I was sad for the other mother who was now being told her precious child was going home with an injury. Thankfully, I have not been on either side too often, and now that both my children are getting older these sorts of things happen less and less. However, last Friday proved to me that although rare, hitting can occur at any age.

My sweet daughter, who is quite the opposite of Monty in feistiness, came home from school last week with a bruise the size and shape of a ten-year-old boys fist. Shocked, flabbergasted, upset, concerned, angry; no livid, enraged, outraged, beside myself, sweaty, dizzy, pacing up and down the kitchen…. How could anyone do this? These kids should know better at this age. I spent the whole of Friday night, drinking wine, getting more and more cross. Saturday morning arrived, I was regretting the wine, and also regretting how horribly I had handled my emotions.

Thinking about a boy hitting a girl was pretty shocking to me, as sexist as that sounds, especially in Australia; a country so hell bent on cutting out domestic violence and a country that insists on teaching children about the seriousness of violence after so many “one punch” deaths… From my quaint English countryside point of view it can be a little too much detail for young children, however, domestic violence campaigners are currently calling for young Australians to be better educated about the dangers of violent relationships, though the new national curriculum. This only goes to prove how seriously they take it here. In 2015 New South Wales became the first state to introduce school lessons specifically on domestic violence.

In no way am I accusing Australia of being any worse than anywhere else in the world, but it is definitely a huge issue here and a fairly big talking point.

So, Poppy comes home injured, upset, frightened, and I somehow feel the same. How could this happen? Why was she not safe at school? Who was watching them? Why didn’t this get stopped before it escalated? Why would a boy attack a girl? I had so many questions, and just like Monty, I was ready to explode, I was like a lioness protecting her cubs.

Then, I got to thinking about how I would have felt if this was the other way around? What if Monty had hurt someone at school? How would I feel if I’d had a phone call to say he had punched someone so hard they had to go and have an x-ray? Honestly…. I think that feeling would far outweigh my frenzied lioness feelings. To learn that your child has shown such aggression toward another student has to be heartbreaking to say the least.

When we send our children out into the big wide world, we hope that we have taught them enough to cope in certain situations, how to stand up for themselves in the right way, how to use their manners ALL OF THE TIME! What we don’t really consider as parents is, sometimes they will forget these rules, accidentally let loose and lash out, forget to wash their hands or say please may I. This in no way is a reflection on the school or the teachers, nor is it a reflection on how we have parented our children. Sometimes kids just get it wrong, very wrong. I know I have done my best to teach my children the difference between right and wrong, yet still they lash out at each other, answer me back, shout, and throw tantrums. I couldn’t tell you I’m 100% sure my son would never lash out and hit a girl. Just in the way you couldn’t either.  I am in no way condoning violent behaviour, but I am willing to stand up for all those mothers who have done nothing but try their best, and are still made to feel like they haven’t done enough by the way their children mistakenly react to situations. The mothers who have tried and tried to teach their children to stand up for themselves in a pretty frightening world, but not so much so that they end up being the bad kid. How on earth can we be expected to get that balance right? We don’t want to see them hit, just as much as we don’t want them to be the hitter.

Primary school is where we send them to hone the life skills that we have implemented. We send them to be taught in a structured environment that they have never really experienced before. We send them there, into a room, with many different personalities, lots of little voices, all competing for one teacher’s attention. And yes, by the age of 10 they should have mastered lots of life skills, but still, 10 is so young, and a 10 year old still has so much more time to learn, and grow, and be taught.

So whether your child is the hitter, or has been hit is irrelevant. What’s most important is that they have learnt a valuable lesson. We must remember that school is there to help us teach them that life isn’t perfect and that people aren’t perfect. It’s there to teach them that some people forget themselves in situations, there are consequences for that, and that’s how they learn. As long as we all support our children, teach them how they should behave, and what is expected of them, then fingers crossed we can send them off into the even wider world of adulthood, where they will succeed as well rounded individuals. Let’s not make everything so black and white, let’s not blame each other, let’s just show our children that we can look at things from many different angles, and maybe just maybe, this will help them grow up to be even more compassionate, more understanding and more respectful adults.

Teaching a child not to step on a caterpillar, is as valuable to the child as it is the caterpillar – Bradley Millar

9 thoughts on “To hit or to be hit? A parenting nightmare!”

#wfh lunch break..elevated! I added green powders for some extra va va BOOM 💥 🥬
Sunday…… 😳
Noise cancelling headphones ✅
Not 'a day late', because every day is an "are you ok" day in our house. You know why? It's simple.. We understand trauma first hand in our home, we understand the devastating impact mental illness can bring to someone, their friends & their family. We know first hand what it looks & feels like when it runs like wild fire through every single waking moment of your day, and when it nastily creeps up on you when you were sure it had faded away! Everyday is a new opportunity to reach out, to check in and to remember just how fucking precious feeling ok really is! So, what I'm trying to say is, don't wait to check in on someone, don't ever do this half heartedly..Do it mindfully, every single day, for yourself and for those around you!
📣PSA 📣Have your kids discovered the @cottonon @typo_australia MYSTERY BOXES?? These are amazing!! For just $30 we got this awesome ‘Stationery Lovers’ haul today! Nearly $100 worth of goodies inside #winning 😄😄 And before you say “ah it’s just pot luck what you get and you could end up with hardly anything”… this is our third box and trust me, they’ve all been FAB! The perfect lockdown surprise for the kids!! Would you or yours love this??
Channeling my inner Gilmore Girl to get me through Monday ☕️ Who else is drinking a gallon of the good stuff this morning?