On a day when ‘decent news’ is all we want and so incredibly important to us as expats living so far from home; I thought it was the perfect time to share with you this wonderfully written article from Anna, The Faraway Mum. Anna tells us how she feels, having left the “good old Beeb” behind.

Anna Demetriou lives in Philadelphia, USA with her husband and daughter. She blogs at The Faraway Mum about the highs and lows of embarking on new parenthood a long way from home, and can also be found on Instagram (@the_faraway_mum) and Facebook (@thefarawaymum).

When Olivia kindly asked me to guest-author a blog on the subject of ‘those we left behind’, I knew straight away what I wanted to write about. Like many of us living abroad and far away from home, of course the thing I miss most is family, followed closely by friends, Yorkshire tea and Mr Kipling’s Cherry Bakewells (usually, but not always in that order – depends how tough a day it’s been with the toddler). But as a Brit who has now been living in America for 2.5 years, I’ve learnt to deal with the gaps between trips and fixes of home comforts, and in their place the thing I am most craving in these chaotic and uncertain times is something I used to take completely for granted: unbiased and reliable news.

Back home in Britain, I certainly wasn’t a current affairs whizz, but I would have described myself as a fairly regular consumer of news. It was just part of the daily routine: I’d listen to the headlines on the radio in the morning, browse the pages of the Evening Standard on the commute home, and spend the week getting through the supplements of the Saturday Guardian that I hadn’t managed to finish at the weekend. I knew the relative biases – both in terms of subject focus and political leaning – of each of these news outlets so could take their respective positions with a pinch of salt, trying to use them to inform but not dictate my own views. If in doubt about an issue (which I frequently was), my end-of-the-day dash to finish marking a set of books and iron an outfit for the following day would normally be done whilst watching the 10pm news on BBC1 anyway – a chance to consolidate the day’s happenings with factual reporting and, where opinion was expressed, take comfort in the fact that I was being presented with both sides of the argument. It’s there at the heart of the organisation’s values: ‘Trust is the foundation of the BBC: we are independent, impartial and honest.’ It feels very un-British to laud such aims without a hint of cynicism, but damn, that’s pretty admirable isn’t it?

Here in America, my news consumption is very different. Perhaps because I no longer commute, or enjoy the luxury of lazy weekend mornings lounging with the weekend papers over coffee (one of the sheer joys of pre-parenthood I never thought to savour before the arrival of my daughter), my news is now either filtered through social media and snatched during nap time, or absorbed in a state of end-of-the-day exhaustion when my husband and I finally crash in front of the TV. I try to read articles online from a range of sources, but I’m well aware of the danger of the ‘echo chamber’, whereby the stories I gravitate to are those shared by friends on Facebook – friends who, by and large, have similar experiences and outlooks to me. And the television news here is so different to what I’m used to at home – in my opinion, far poorer for it. In my experience (and I’ll be the first to admit I don’t have time to browse the hundreds of channels available on US cable, so I may be looking in the wrong places), the news is either very local – concerned exclusively with happenings in our city and surrounding areas, not even looking to state-wide issues, let alone national or (heaven forbid) international stories – or it focuses almost exclusively on political news with a strong ideological leaning.

Honestly, over the last two years you’d have thought this country was operating without an incumbent president with almost a quarter of his time left in office – such was the dominance of coverage of the Democratic and Republican primaries and their candidates’ every moves, and then the election itself of course. Obama and his domestic agenda, and any international news (unless it had a direct impact on the election), hardly got a look-in. It’s not difficult to see where some of the appetite for the insular, nationalist agenda pursued by the Trump campaign has come from…..

Perhaps the most difficult thing to stomach about TV news here is the editorial style embraced by all the big networks. Why waste screen time on objective, fact-based reporting, when you can spark an argument between two equally opinionated ‘experts’ and have them shout each other down until it’s time to cut to a commercial break? (And yes, of course the commercial nature of the news networks is in large part responsible for their subjectivity – another piece of this endlessly frustrating puzzle). The prime-time evening shows take it even further, with a sole presenter who spends lengthy segments opining down the lens on their own views, often posturing and speculating with limited facts which succeeds in little else than riling the audience. I find myself turning off in frustration (honestly, sometimes in disgust) even from the channels whose positions I ideologically tend to sympathise with, because so much of it is unsubstantiated hot air.

Is it any wonder that America is currently so divided? That Trump is succeeding in convincing so many millions that traditional media outlets are the enemy? That ‘fake news’ allegedly played such a role in determining how many people voted on Election Day? The TV media make it hard for the public to trust them, because they make no attempt to hide their bias and often pursue speculative agendas without supporting evidence; as a result, people lose confidence and just switch over, burying their head in the sand of some uncontroversial home improvement show or reality TV dating extravaganza (guilty). And that’s truly a frightening thing at a time and in a climate when all over the world, perhaps more than ever, we arguably need to be better informed than we ever have been before.

So yes, right now one of the ‘things I left behind’ that I miss the most is a daily dose of the good old Beeb. And if you could pair my 10pm Huw Edwards fix with a living room full of family and friends, a strong cuppa and a cherry bakewell, you’d find me in seventh heaven. 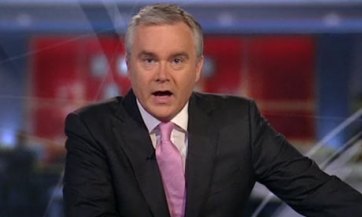 How wonderful it is, that nobody need wait a single moment before starting to improve the world – Anne Frank