There’s nothing easy about travelling with children! Just going to do the school run is fraught enough, let alone 6 flights in two weeks! Here goes nothing!

We have just taken off from Kuala Lumpar where we had an awesome time! We managed to squeeze in quite a bit over three days and we’re all pretty exhausted! Monty is currently catching flies in seat 23E!

KL was about 43 degrees and really humid! I can honestly say I’m not sure I have ever sweat so much! (Note to self : cancel gym membership!) The humidity always puts me a little on edge as it tends to make monty’s nose bleed, but hurrah I still have a full loo roll in my bag!

On the morning of day 1, Tim surprised us all and told us we were being collected at 10am and being whisked off to the local water park! The children jumped for joy, I sort of sighed! For those of you that don’t know, I am claustrophobic and it’s getting worse as I get older! The thought of one of those tube slides fills me with dread! I can already hear the children shouting “mummy’s a chicken, mummy’s a chicken”!

We drive hell for leather in the hotel mini bus out to  Desa Water Park. I’m not sure what I was expecting but it wasn’t exactly as I had imagined! We turned into the car park, bunny hopped through the pot holes and bumped through grassy ditches to a hut where we were greeted by a lady who looked like a member of the special forces! She must have done some kind of training as she had managed to use an upside down plastic garden chair to secure her table fan to the wall! She looked at our passes and pulled the string to open the barrier!

The waterpark can only be described as looking like one of those spooky abandoned theme parks! That is no understatement ! If you have issues about E. coli, typhoid, D&V or any “cleanliness” related illnesses, this is not the place for you! Having said that, none of us were sick. ( Wretching  at the state of the bathrooms doesn’t count as sick does it? )

I don’t know what it is about my kids and water! They forget themselves and start ripping at their clothes before we can get into the changing room! Not that it really matters as we were literally the only people in the whole place, apart from the 4 lifeguards sheltering in the shade. 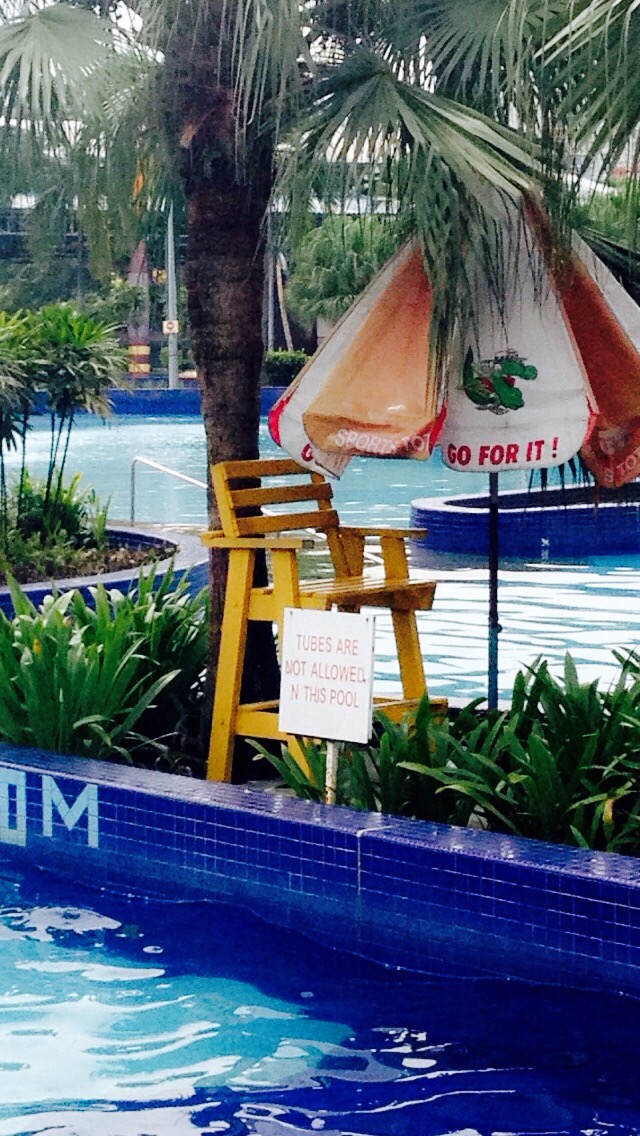 There were 4 or 5 different pools, the slides looked like they could disintegrate at any moment! The ropes were all rotten and the lifeguards chairs had been eaten by Mother Nature! The lazy river was the laziest river you have ever been in! It took about 25 minutes to get around the “water factory” and past the man hosing bird shit off himself! The wave pool was pretty spectacular considering! Although Poppy did get washed to the far end on her rubber ring! This was only ten minutes after she had managed to get wedged in the ring, bottom sunk down and legs in the air! Safe to say we woke the life guards up as Tim skidded through the the sludge towards poppy as she screamed “HELP, heeeelp, I can’t breatheeee!” 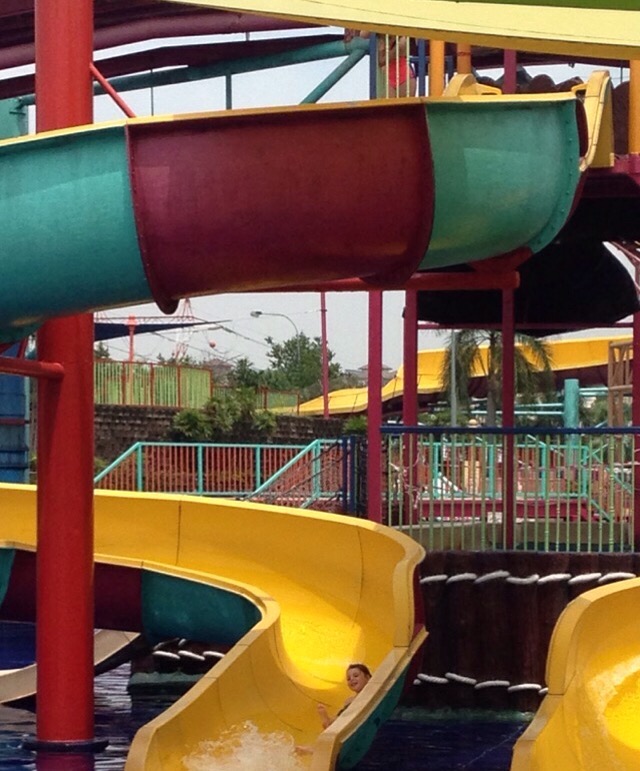 14:30 (pick up time) came around a lot faster than I thought it would! The children had thoroughly enjoyed the day, even with me shrieking ” close your mouth” and “don’t swallow any water ” closely followed by “spit, spit, spit!” I don’t know why I was insisting they didn’t drink the water, especially as 10 minutes later they were gorging on luminous orange cheesy hoops and bright yellow lemonade!?!?

All in all a successful day of sheer bliss for the kids and an exceptional day of parenting! *high five!

Day 2 was the sightseeing day! We couldn’t come all this way without visiting the Petronas twin towers! We hopped on the monorail, already sweating from the two minute walk from the beautifully air conditioned hotel! Three of us were excited to be above the street, screeching round corners! Poppy was whimpering, shaking and muttering “I don’t like heights, I don’t like heights”. This did not bode well for our trip up the highest twin buildings in the world! 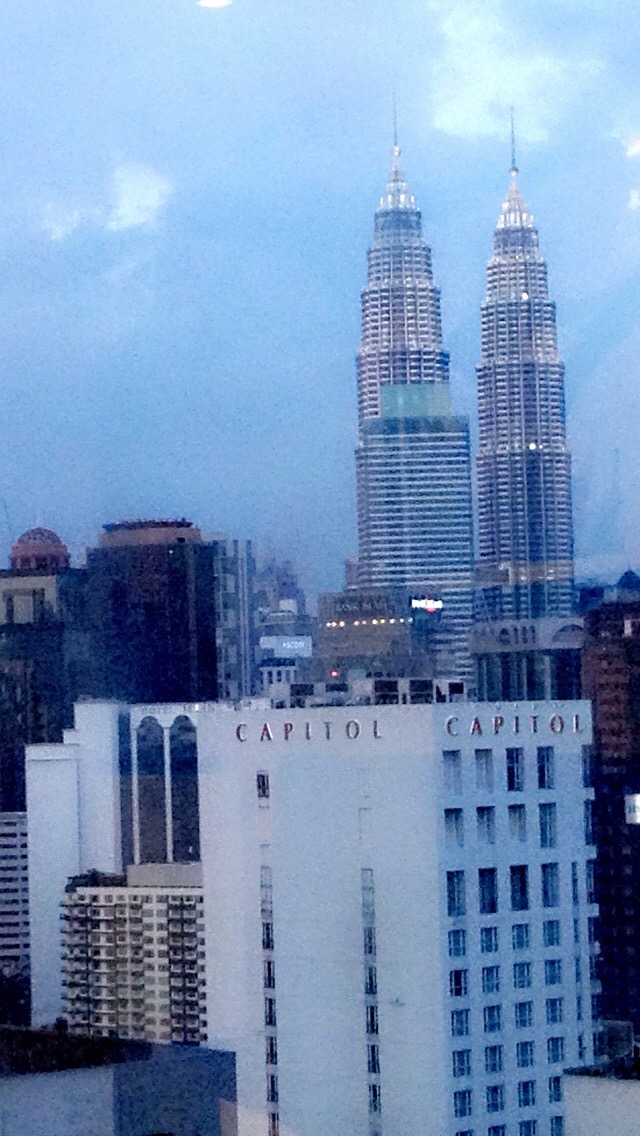 The Petronas Towers are the sparkliest, shiniest most wonderful looking buildings! We saw them all lit up the night we arrived and it sent a shiver down my spine! You see these icons on the TV, it’s hard to believe we’re here!

Once you have made it through the security checks at the towers, a hologram greets you to explain the tour and basically asks you to behave! Monty listened eagerly then slam dunked his sister into the couch! Oh Jesus! We cram into an elevator with ten other people in the green group and head for the 80 something floor! Poppy looks terrified so I try to lighten the mood by saying “gosh this is exciting! It’s just like Willy Wonkers Glass Elevator”, at which point Tim laughs and says “let’s hope it’s not going to shoot through the roof like in the story!” How does that man miss the point so regularly? Poppy is now heavy breathing and Monty (overtired) is growling while squashed up against some American woman’s backside. The doors opened and we finally got to see the view from the ‘Sky Bridge’, well, not until after the helpful guide told us that it’s not really attached, so it swings when it’s windy! Poppy nearly faints!

The view is spectacular! “How did we end up here?” I think to myself! Kuala Lumpur is such a wonderful place. As I am daydreaming, Monty is being bollocked by Tim for climbing on the rails, right next to the bloody sign that says ‘do not climb on the bloody rails’, why do kids do that? Anyway he sees the playpark  down below and decides he’s had enough and it’s time to go! Monty likes to do what Monty likes to do, so he wasn’t best pleased that we were heading even higher up the towers! This led to a spectacular breakdown and the award for the worlds “highest” tantrum! Mummy needs a G&T.

Tower done, awful family photo with superimposed fireworks purchased, and we had a sleeping Monty so we headed to the Batu Caves!

Obviously when you travel with delightful children such as ours, they take in the wonders, they marvel at the majesty….. Oh no! If you were to ask mine about their visit to the caves they would tell you about the dead bird in the fountain and me screaming as a monkey launches itself at me to steal my shopping! Utter bastard! 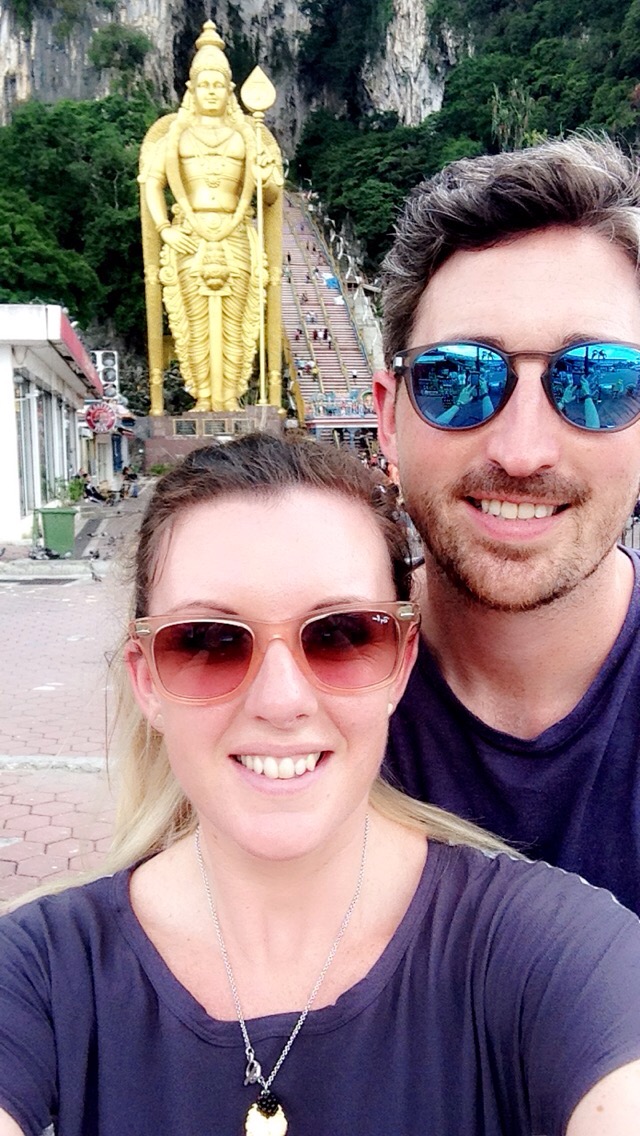 We spent a couple of hours at the Batu Caves, even though the terrifying monkey assault had ruined monty’s afternoon! He did helpfully warn me that next time I should “kick them up the butt”.

We found a sweet little cafe serving up fresh dosa and roti. Tim and I indulged while the children moaned and begged for more lemonade! It was a great spot for people watching. We had a right old laugh at the tourists trying to escape the flocks of hungry birds and at the scores of monkeys stealing people’s food. (Obviously when the rabid monkey was hurtling toward Monty and I, on a mission to steal my carrier bag, I was screaming for dear life and in no way at all did I find it funny).

So, we nailed the caves, no one contracted rabies and we made our way back on the air conditioned train, mostly in the ladies only carriage until we spotted the sign!

After a very sweaty trip to the Central market and a walk round china town, Tim finally gave in to the screams of “I want I want” and spent a small fortune on a load of utter crap. So the children win again and we jump back on the monorail heading for the hotel bar!

My only bit of advice to anyone travelling to a boiling hot country to sightsee, with two little darlings is: wing it, drink lots of wine and give them anything they want as soon as they want it! 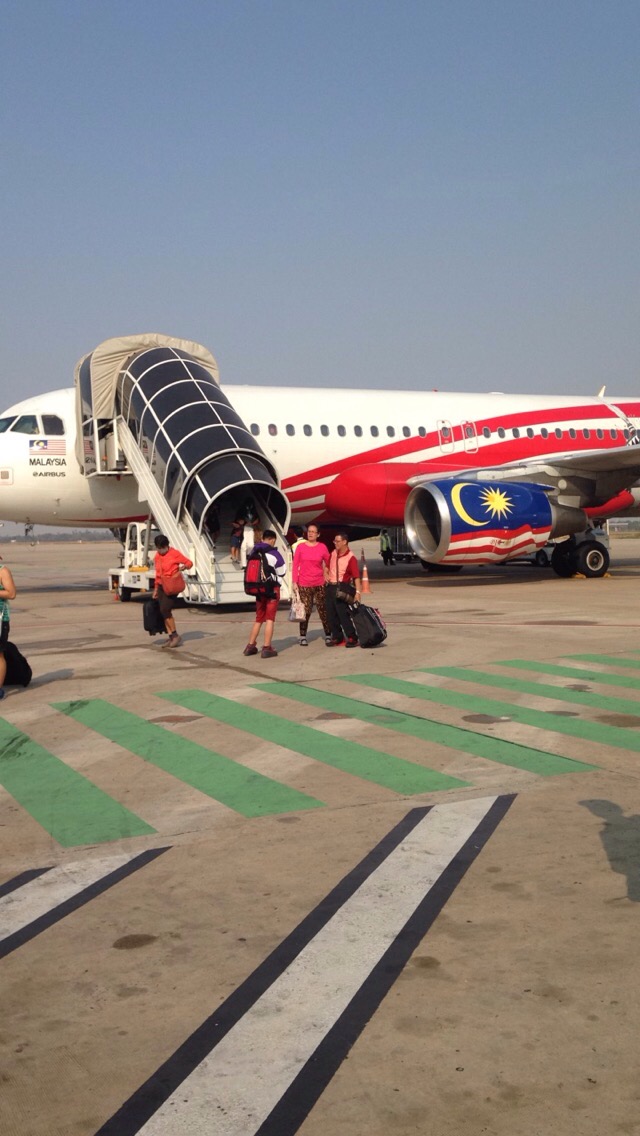 One thought on “Tandas means toilet in Malaysian! ”

Soakin’ up the Brisbane sunshine in the back of an Uber before heading into expo! (gotta get it where you can!) Dreaming of my 6pm wine tonight! Have a ripper day everyone and cross all your fingers and toes that my girl win her netball Grand Final today! 🤞🏻
Longest day ever! Can’t complain about this little resting place though! Night y’all ☀️✨
Hello to everyone who leapt to tear the door open every time the sun fought through the hail storms today. You’re my people! 👋 ☀️ No way was I gonna let my @wotnotnaturals 40 SPF natural face sunscreen, BB cream + mineral makeup go to waste any longer! Come at me sunshine!!!
Stormy weather still making our swims a little bit meh! Omg that wind!!!! 💨 Thank goodness for my @toastylife_ swim coat … always waiting on the beach to give me a warm hug when I leave the water! Come on Summer, we’re well and truly ready for you!!!
Little #longneckedturtle ended up on #edithvalebeach this morning, not their usual habitat but the storms must have pushed it down river.
Wow. Hail swims are a thrill!!! Wild and wintery this morning! Did you get in today?