Well, I have made it to 34! I love birthdays! Really love them! I love them even more now that I have the children! They got so excited, so much so that I was forced to open a present on the eve of my birthday, and was promtly told what exactly was wrapped up downstairs for the morning! No surprises here!  Then when I woke on my birthday I wasn’t allowed to open my own presents as Monty deemed me “to weak”! 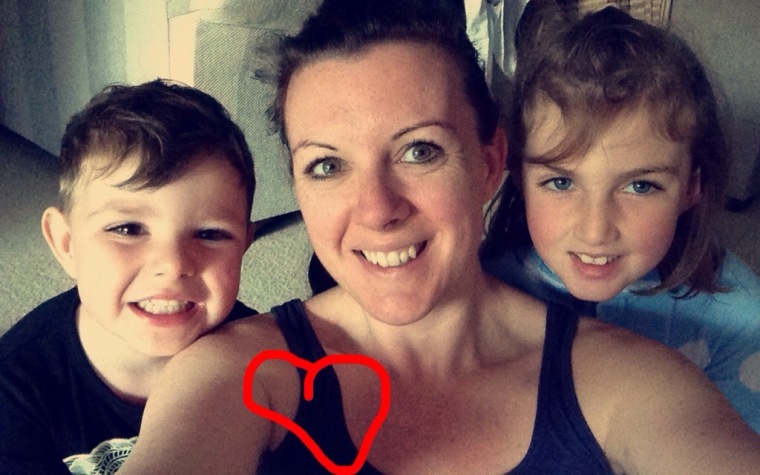 We had an awesome day! My lovely Aussie buddies arranged a trip to the park, where I was serenaded by them and the children singing “happy birthday” after which I gobbled down a tonne of cake! Wouldn’t have been so bad, but two hours later I was tucking into a 9 course meal! (Summersalt.com.au) Safe to say the gym was hard last night! 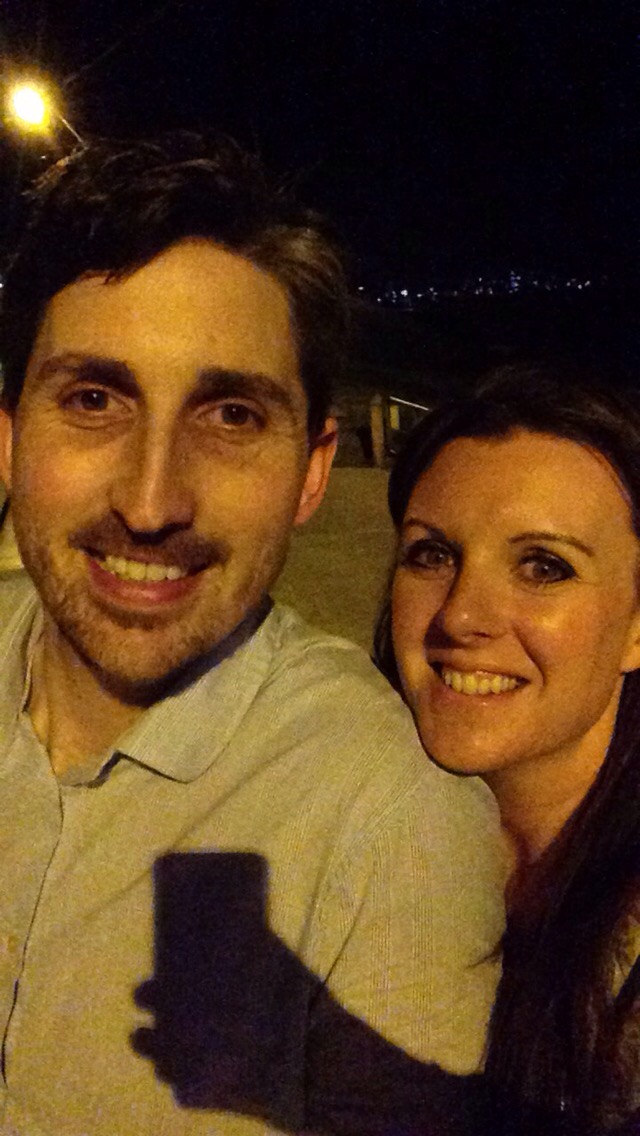 We have had an awesome couple of weeks! We took the children to Symbio zoo! It’s pretty small, but a great place! The highlights had to be hand feeding the Kangaroos and seeing a snotty little kid getting bitten by a wombat! (Dad was in charge! Surprise suprise?) (no Cilla pun intended) I wasn’t sure who was more delighted, the little kids siblings or the wombat! I guessed it would be wrong to photograph a crying, bleeding child so you’ll have to just put up with the Kangaroos! 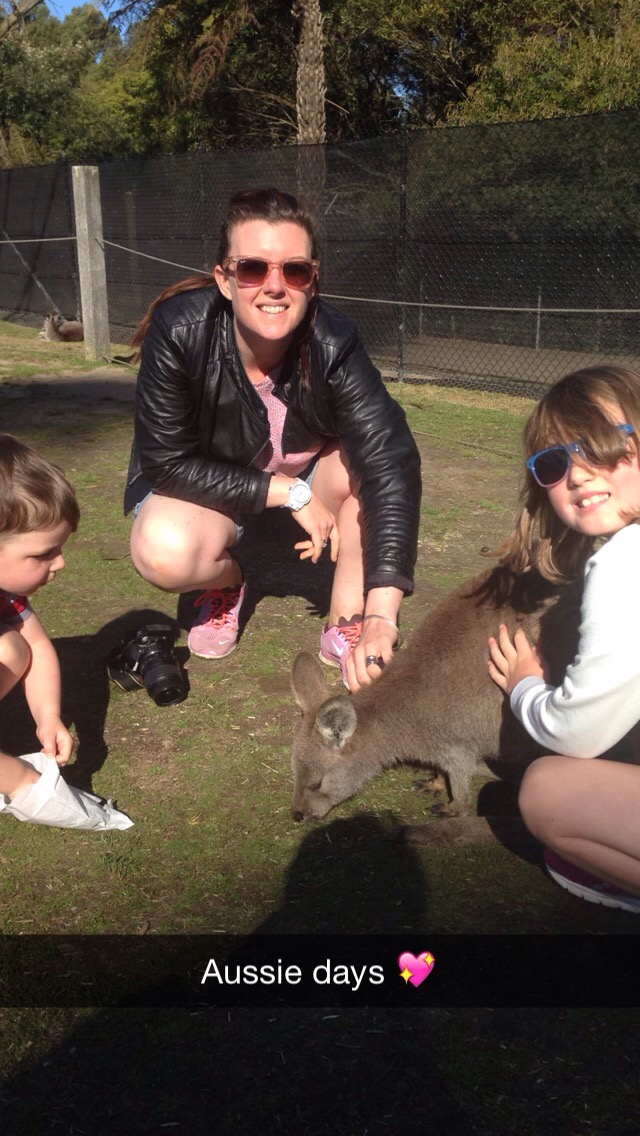 Our weekends seem to be packed with all sorts of great little trips! This weekend we have been out to the Blue  Mountains. The scenery is stunning, nothing like anywhere I have ever been! The scent of eucalyptus was awesome; that and the butter Popcorn they were selling by the bucket load to hugely overweight children, who were then hugely dehydrated!!!

In typical Wilson style, a force 10 gale picked up as we stepped onto the cable car! I clung on for dear life as we hurtled left and right! Tim was hysterical, with laughter I might add, as I was putting on a brave (ish) face! The children were fine, trying to spot koalas!! The views from up high were unbelievable! We could see down through the glass floor (um…. One eye closed), as we flew across the tree tops! It wasn’t too terrifying, until the tour guide mentioned the waterfalls! This encouraged 50 Japanese tourists to scamper across the car all at the same time! Jesus how the cables didn’t snap I will never know! I shrieked “stop! Christ!” Tim laughed and Poppy burst into tears! We’re so ace at “adventure”!!

Our Sunday morning was pretty ordinary! The children had a party to go to in the afternoon so we lazed about, the children played and watched TV, we pottered around in the garden! Then it got to that time when you see how much of the day has gone by and you jump into Seargent major mode! “Everyone get dresssssed, turn the tellllllyyyyy off NOw!!!! Come oooooon! We’ve wasted the whole moooooooorninnng”. 40 minutes of that, followed by some frantic hair and teeth brushing and we were out the door?  Phew! It meant we had a morning at the park with much coffee for us and ice blocks (lollies) for the kids!

They wouldn’t have had the ice blocks if I had known what gets served at kids parties here! They went to a lovely party in a play centre! There were hundreds of small, sweaty, red faced kids running around like dingbats! Mainly because they had been fuelled with…. Wait for it…. “Fairy bread”! Do you know what fairy bread is!? Fairy bread is sliced white bread, smothered in butter and then covered in hundreds and thousands! It’s a kids party staple here! What sort of mentalist thought that would be a good idea! The children were going nuts! I love that people don’t let their kids drink apple juice, looking around for approval, “only water for mine!!!”  but hey “have another slice of fairy bread son!” Don’t get me wrong, my kids get far too many treats but JESUS CHRIST!!!! Fairy flipping bread!!!! It’s so bad, I can imagine kids selling it behind the bike sheds for some extra cash! You have to be superhuman for fairy bread not to have any impact on your state of mind! Surely!?!? Having said that, the party passed by without Monty kicking anyone in the “Winkie” or threatening to shoot anyone’s eyeballs out, both of which are fairly common place! He did spend quite a while hollering at people “there’s nothing that a good smash can’t sort!” Incredible Hulk has a lot to answer for! Well it’s either Hulk or Monty’s  been buying black market fairy bread!!! He has hasn’t he!!!!!!

I’ll leave you with this little beauty I found today!!!

New research has found age 34 is the happiest of our lives on average !

It’s when people start ticking off boxes including marriage and children!

A Study of 2,000 over-40s found it was when most people were happiest

It’s also the age when we’re most comfortable with ourselves!

Most people said that they had become happier as they had grown older !

One thought on “Not getting old… Getting better! ”

💔 Meatloaf 💔 Thank you for the school disco thrills and the stories I now terrify my kids with ❤️ The greatest! 💔
Last night ❤️ @thegeorgeoncollins ❤️
Just keep swimming…. 🏊🏻‍♂️
We finally checked out @yakimono_au at the weekend! O…M….G! The food is 🤯 the staff are ❤️❤️❤️ and Monty told us it’s his favourite ever place to eat because all the different flavours made him happy & he liked watching the man make the sushi 🍣 Pretty much my thoughts entirely! Get this on your list #foodies ✌🏻
…..lost in paradise 🚤
Snoozy Sunday 🚤