So many times I have wished I had a small cell with chains attached to the walls where I could lock my kids up for a while. Richmond Gaol in Tasmania made these dreams come true last week.

As soon as we hopped out of the car, we noticed the beautiful autumnal trees, the lawn covered in huge orange leaves, and were shocked at how beautiful it was. Are you sure this is where the prison is?

Richmond is a heavenly little town comprised of beautiful old buildings, many of which made from limestone. The town was established as an important military staging post and convict station linking Hobart with Port Arthur. Richmond Gaol was built over a period of 15 years, between 1825 and 1840 and stands proud in the town.

We headed for the main entrance, went through the doors and into the Airing Yard which was used for prisoner’s daily exercise. We had stepped back in time. Instantly I had a weird, creepy feeling come over me. There is definitely a hint of ‘eerieness’ here. The children looked at me uneasily as they heard voices of prisoners being played across the courtyard. I can’t say I have ever had such a spooky feeling anywhere. Maybe I had psyched myself up too much before going in.

Thankfully the children had been given a ‘trail sheet’ to keep them busy, and they hurried off straight away to start their search! Fantastic! We had no “I’m bored’s” or “can we go now’s”, they were completely enthralled! All of us were fascinated by the stories about the prisoners who once existed in the rooms we were standing in. The kids loved chaining themselves to the wall almost as much as I loved chaining them. I was frantically shoving them into the tiny cell, pushing them into the right place, and cackling as I buckled them in… If only the door had closed properly. (Kidding of course! I wouldn’t have reaaaally left them in there… for long). 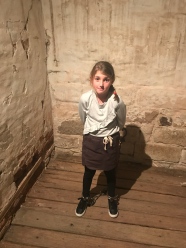 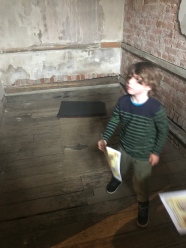 Once they had managed to wriggle free they were back to looking for the hidden items on their charts. The quiz definitely made us all experience that little bit more of the museum.

Next stop were the solitary confinement cells!! They were dark! Honestly, we all had the heebie jeebies. It is a truly spine chilling space. The children and I waltzed in, then sped into reverse and sent Mr W in first! Even he wasn’t too pleased to be in there. The stories of what the prisoners endured, for seemingly minor crimes was horrifying. To think of young men and women being kept in these completely dark, cold spaces, sometimes for months and months on end was just awful. The children were wide eyed in amazement.

We read stories of hundreds of prisoners, male and female, whose lives were harsh beyond belief. There were tales of daring escapes, lashings, and mistreatment, interspersed with a few heart warming stories, like the almond tree in the courtyard being planted as a thank you from a small aboriginal boy who visited the Gaol for medical treatment.

Whilst we were in amongst all the stories of despair and sadness, Monty was out the back, checking out the privvy in the flogging yard! Blissfully unaware of the dreadful sound effects everyone else was listening to of some poor soul being beaten, he hollered “look mum there’s a toilet”. Why do boys find all things “lavatory” fun?

We went on to see the cook house, (“No Monty it’s not a Pizza Oven!” **Hangs head in shame) the sleeping rooms, and the punishment cell. We read more chilling tales, and heard about the ghosts that are often seen at the gaol, and even in people’s photos once they get home! I was praying we’d find something in ours, but no such luck! We did have one lovely photo of someone picking his nose!! 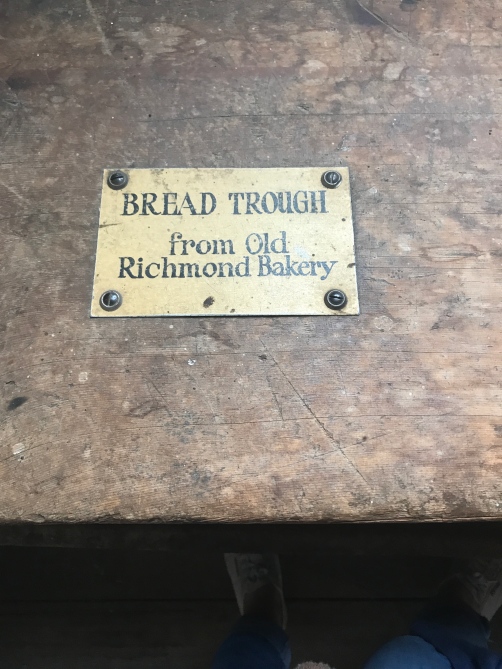 We were all completely taken a back by the authenticity of the museum and the feeling you get walking on the same ground that many a ‘criminal’ walked upon. 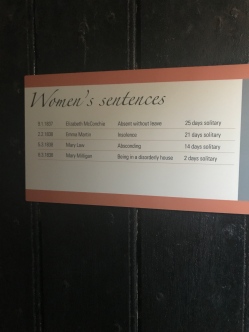 We loved the story of Isaac “Ikey” Solomon (1785–1850) an English criminal who became an “extremely successful receiver of stolen property”. He is supposedly the man who Dickens based Oliver Twist’s ‘Fagan’ on. Truly extraordinary to think that after being tried at the Old Bailey in 1830, he was was sent all the way to Richmond Gaol. Imagine that?!?!

This is one of those special places that’s engaging, entertaining, and where the whole family comes away having enjoyed learning something new together. We just can’t stop talking about it!

Richmond Gaol is fascinating and ticked all the boxes. I just wish we could have left the kids chained to the wall a little longer so as we could have grabbed a beer in peace.

The History of the jail can be found HERE!

One thought on “Richmond Gaol – Tasmania”

Soakin’ up the Brisbane sunshine in the back of an Uber before heading into expo! (gotta get it where you can!) Dreaming of my 6pm wine tonight! Have a ripper day everyone and cross all your fingers and toes that my girl win her netball Grand Final today! 🤞🏻
Longest day ever! Can’t complain about this little resting place though! Night y’all ☀️✨
Hello to everyone who leapt to tear the door open every time the sun fought through the hail storms today. You’re my people! 👋 ☀️ No way was I gonna let my @wotnotnaturals 40 SPF natural face sunscreen, BB cream + mineral makeup go to waste any longer! Come at me sunshine!!!
Stormy weather still making our swims a little bit meh! Omg that wind!!!! 💨 Thank goodness for my @toastylife_ swim coat … always waiting on the beach to give me a warm hug when I leave the water! Come on Summer, we’re well and truly ready for you!!!
Little #longneckedturtle ended up on #edithvalebeach this morning, not their usual habitat but the storms must have pushed it down river.
Wow. Hail swims are a thrill!!! Wild and wintery this morning! Did you get in today?